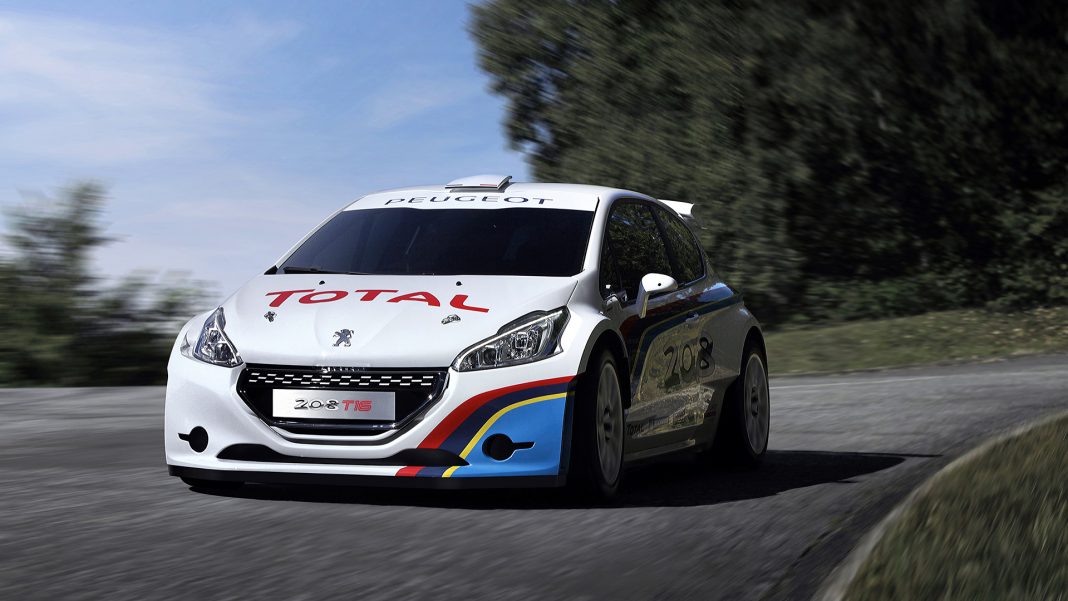 Peugeot is known for its driving performance in the rally races. Despite the changing environments, Peugeot remained dominant over the years in these formats. Using the race data to create improved vehicles, we should expect the best with the Peugeot 208 T16. The Peugeot 208 T16 is a high-end car looking not only to beat but surpass the current Pikes Peak record this June. The already ominous Peugeot 208 T16 even became more serious when it was revealed in its race form.

With a carbon-fiber body, the Peugeot 208 T16 is expected to be a lightweight, fine-tuned sports car. The French car manufacturer is pretty focused this year to dominate the June 30 Pikes Peak with their Peugeot 208 T16’s mid-engine design.

The Peugeot 208 T16 released a photo of the car with all the racing decals set up. The photo included wheels from Micheline and decals from both Red Bull and Total.

Sports tuned, with a tubular steel frame to provide safety to the driver, this car is ready to take the road. Peugeot decided to empower its latest race car with a twin-turbo V6 engine. It is also connected to an all-wheel drive system that will allow the car to be propelled from 0 to 100 kilometers per hour in just 1.8 seconds.

Since Peugeot 208 T16 was created to be a superb machine, the company chose Sebastian Loeb to handle the vehicle for its June 30 outing with Pikes Peak.

Does It Have a Chance?

Considering the adjustments on the body and the turbocharged engine, there is a strong chance that the Peugeot 208 T16 can actually dominate the June 30 Pikes Peak race. Peugeot 208 T16 was aerodynamically designed especially in its final racing form. It utilizes large front and rear wings to even add traction to the car. Between the wheels and the ground, it is possible to eliminate any possibility of a jackrabbit start. According to the test made on the Peugeot 208, it can accelerate to 100 kilometers per hour in less than 2 seconds. This means that there is a possibility of slips without the downforce elements.

High-end race cars are not meant to travel uphill with rough roads. This is the big difference between Peugeot cars. The Peugeot cars are designed to perform and obliterate competition whenever they go to these unpredictable environments. Over the years, they’ve developed a knack for utilizing the best technology to improve the handling and the overall performance of their vehicles.

Now, it is the Peugeot 208 T16 that needs to prove itself. With Sebastian Loeb inside the cockpit of the new Peugeot, will it be possible to dominate the Pikes Peak? Sebastian Loeb is not a stranger to success, winning nine World Rally Championships. According to his comments regarding the Peugeot 208 T16, he mentioned that the car has a downforce of a Formula 1 and the overall ruggedness of a top-notch WRC car.