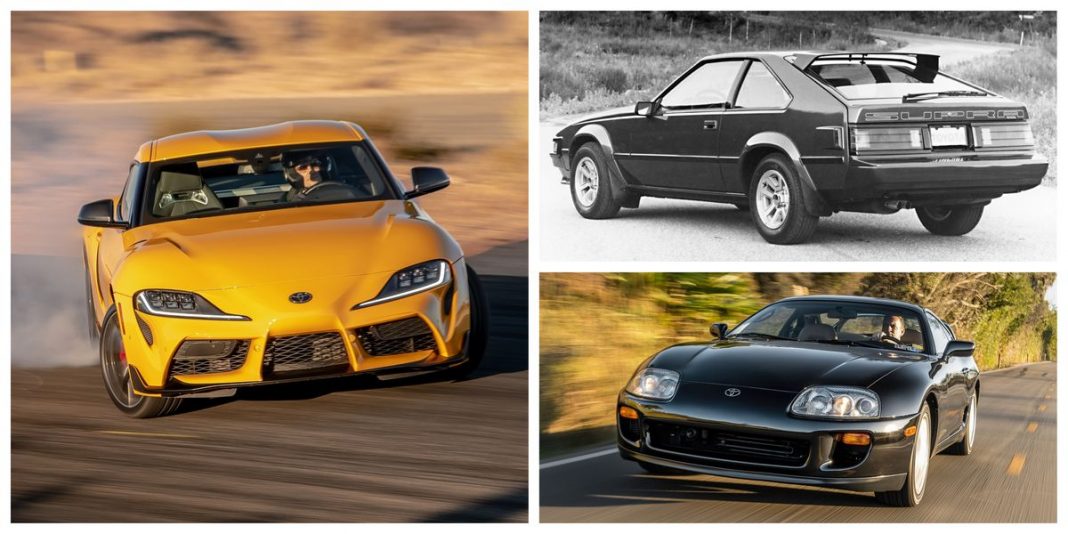 The Toyota supra GT car has a long history. It was produced by Toyota motor corporation way back in 1978. The design of this car was derived from the Toyota Celica but the Toyota Supra GT car was a little bit longer as compared to the Celica version. By 1986 the Toyota Supra entered into the third phase with the production of Mark III which became its own model whose design was no longer based on the Celica.

This third-generation was assembled in Tahara. The car traces its roots to the Toyota 2000GT with the focus being on its engine. The first three generations of this car had a direct connection to the Toyota Crown. The car had an inline 6 cylinder engine with similar interior aspects.

The Toyota supra had its own logo which was ideally derived from the original Celica. By 1986, the Mark III Supra came up with its own logo which had some orange writings that were done on a red background but lacked the dragon design.

This is the Logo that Toyota Supra used till 1991 when it switched to the current oval logo. By 1998 the sale of Toyota Supra in the US was halted and Toyota stopped production of this car in Japan.

The Japanese version of the Toyota Supra GT had a small 2.0 L engine which ensured that the buyers of this vehicle did not pay the additional tax that was charged on the size of the engine displacement regulation. The engine was equipped with electronic fuel injection.

The supra GT was exported from Japan to other countries in January 1978. This export version had a 110 hp engine with 12 valves and an E- chassis code. The car was either 5- speed manual or a 4-speed overdrive gear where the automatic transmission was highly featured.

The 5-speed car featured an overdrive gear while the automatic transmission featured a gear that was capable of engaging at a speed of 56 km/h. The car came in standard 4 wheel disc brakes and had an area suspension with 4 links, a lateral track bar, a stabilizer, and a coil spring. It also had a front suspension which had a MacPherson strut. The inside of this supra had a power window and power locks that made up the convenient package.